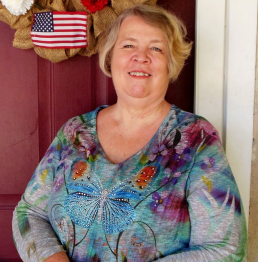 Sandra Kay Kennington passed into eternity on January 29, 2022 after a long courageous battle against melanoma. She was born in Birmingham, Alabama on December 16, 1951 to Raymond Earl and Margie Nell Speights. She grew up in Birmingham and attended Woodlawn High School and EB Erwin High School, graduating from Erwin in 1970.

She married Robert Glenn Kennington in July 1971 and moved to Auburn, Alabama while Robert finished obtaining an engineering degree at Auburn University. Robert and Sandra moved to Edwards AFB in California in 1972 after Robert graduated from Auburn and enlisted in the US Air Force. While living at Edwards AFB their daughters Andrea Leigh and Amy Lynn were born. Living on the military base gave Andrea and Amy the opportunity to enjoy playing with a diverse neighborhood of children such as Markie and many others. Although living on a remote military base had its challenges, the entire family thoroughly enjoyed their four years living at Edwards AFB. When Robert’s enlistment ended in 1976, he became a government civilian engineer at Edwards AFB and he, Sandra, Andrea, and Amy moved to Lancaster, California.

During the family’s many years of living in Lancaster, Sandra became very active in supporting Andrea and Amy in Girl Scouts. They participated in many Girl Scout events such as cookie sales and parades down Lancaster Blvd. Sandra loved making clothes for Andrea and Amy, and often dressed them in identical outfits leading some people to mistake them for twins. Daughter Alison Lauren was born in 1985. While the family was still living in Lancaster, Andrea and Amy married and moved to be with their husbands in the local area. During their time living in Lancaster Sandra met Donna Beyer in a class at Antelope Valley College. Donna and Sandra spent many happy years as very close friends, regularly going out to lunch and dinner and traveling to Ventura, Las Vegas, and other exciting places. Their friendship lasted up until the day Donna tragically passed away from cancer in 2015.

After many enjoyable years living in Lancaster, Robert, Sandra, and Alison moved to Rosamond, California in 1996. Sandra became very active in supporting Alison in school activities. She also spent nearly every weekend with her grandkids who loved visiting ‘Nana’s house.’ In 2007 Amy moved with her husband John Lira and her children Marissa and Cisco to Pennsylvania where John’s new job was located. In 2016 Andrea and her husband Jesse Johnson moved with their daughter Alyssa to Oregon where Jesse’s new job was located. Their daughter Ashleigh soon followed them to Oregon with her husband Jon Kellerman. Andrea's son Austin lives in Quartz Hill with his family, and her son Grant lives in Palmdale.

Sandra loved watching home decorating shows. She enjoyed decorating her home with items purchased in thrift stores and flea markets. She and Alison spent many enjoyable days shopping for items to decorate the home. Alison moved back to Lancaster in 2019 with her fiancé Adam Rose, but stayed in daily contact with Sandra. Sandra also really enjoyed talking on the phone with Andrea, Amy, and her family members living in Alabama.

During her last months of life, Sandra was focused on helping Alison plan her upcoming wedding to Adam. Sandra loved helping Alison select her wedding dress and select wedding decorations. Andrea, Amy, and other members of the family were unable to visit Sandra during her final months due to Covid precautions. Sandra peacefully passed away on January 29, 2022 while holding Robert’s hand.

Sandra was preceded in death by her father Raymond Speights and her brother Larry Speights. She is survived by her husband Robert, daughter Andrea Johnson and her husband Jesse (children Ashleigh, Austin, Grant, and Alyssa), daughter Amy Lira and her husband John (children Marissa and Cisco), and daughter Alison and her fiancé Adam Rose who are expecting their first child in August. Also surviving are Sandra’s mother Margie Speights, her sisters Nancy Bates and Kathy Freeman, and six great-grandchildren (Jamie, Jackson, Jace, Bella, Harlee and Olive).

Sandra requested no services be held for her. Anyone wishing to honor her can contribute to a charity of their choice. Sandra was loved by her family and she loved them with all of her heart. May she rest in eternal peace.