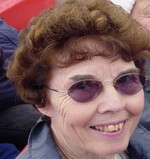 Sally Ann Broomfield, beloved wife, mother and grandmother succumbed on October 19th after a thirty-six-year valiant battle with Parkinson’s disease. Sally was a lifelong registered nurse and nursing instructor. She worked as an RN for many years at Antelope Valley Hospital. She received a Bachelor of Science degree from Chapman University while an LVN instructor at Antelope Valley College for 15 years until she was forced to retire to due her health condition in 1992. She was a member of the American Federation of Teachers, the Sierra Club, and the National Parkinson’s Foundation.

Sally grew up in Bryan, Ohio and attended school there through high school. She then went to Detroit and Ford Hospital for training to be a registered nurse. Sally and Jerry were married in Bryan in 1961 and lived in Madison Heights, Michigan where Sally was a public health nurse and Jerry taught in an elementary school. In 1964 when Bob and Nancy were 2 and 10 months, they pulled up stakes and headed for California where Jerry had a teaching and coaching position at the opening of Quartz Hill High School.

Sally and husband Jerry loved the outdoors and spent forty-two years traveling to every state in the U.S. in many various forms of recreational vehicles. Sally loved the ocean and always looked forward to a long walk on the beach. She also loved being the map reader and navigator on road trips.

Sally is survived by her husband of 58 years, Jerry, her daughter Nancy Perry (Bert) of Lancaster, her son Bob Broomfield (Amy) of Morro Bay and granddaughters, Sara Perry of Phoenix, Arizona and Stephanie Perry of Redwood City, CA.

Because of the presence of the Covid-19 pandemic the service for Sally will be limited to the immediate family in accordance with county protocol. In lieu of flowers the family would appreciate donations to the National Parkinson’s Foundation.