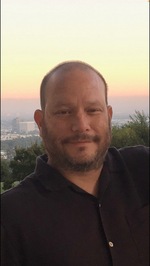 Robert “Bobby” Joseph Ramirez, age 48, passed away on January 12, 2021 with the love of his family and friends surrounding him. Described as talented, artistic, an independent thinker, loyal, sensitive, caring, intense, and a virtuoso by his family and friends, Bobby displayed these attributes in his daily life. Bobby had many passions in life, especially his love for hockey, music, animals, scuba diving and all things related to the ocean, traveling, photography, attending airshows and watching anything about aviation, conversations with family and friends and new acquaintances, and eggs benedict (especially his mother’s).

Bobby’s early love was for hockey, something that continued into adulthood as a fan of the LA Kings. He played during his youth on traveling ice hockey teams in California and Utah, creating wonderful memories that he often reflected on, including off the ice memories of early mornings with his dad driving him to practice.

What most everyone knew about Bobby was his passion and talent for music, as a composer and self-taught pianist and guitarist. Much was inspired by classical composers like Bach and 80’s guitarists. Bobby had great memories of playing guitar in his youth. He often played to entertain his brother’s friends and continued on into his high school years playing in the jazz band as well as sharpening his shredding skills in the garage with his friend Dennis. He honed his composing skills by studying Music Composition at Cal State University Northridge and Film Scoring at University of Southern California. His talents led him into a career in composition, orchestration, music editing and proofreading for short and feature length films. He later worked in post-production sound and audio.

Those who knew Bobby, knew that he enjoyed a good and often long conversation with just about anyone, during a holiday gathering with family, over a beer with friends, with people he met while traveling abroad. He was a caring individual, and we will greatly miss his compassionate heart and the many things he shared with us that added value to our lives.

Bobby is survived by his parents Ed and Shirley, partner Julie, siblings Eddie and Teresa, nieces Makenna and Madison, brother-in-law Matt, aunts Sherry, Barbara, and Jenny, cousin Tasha among many others. Bobby’s numerous friends, especially his Utah friends that called themselves the “Country Oaks Degenerates,” left a monumental impact on him during his time here on Earth. He will be joining his maternal grandparents, paternal grandma “GG”, and his beloved dogs Sebastian and Silesia up in heaven. We will miss your great laugh and big cheeked and mischievous smile Bobby! Rest in Peace! We will all forever love you!

A celebration of Bobby’s life will be held later in the year, at a time when we can all once again gather to share stories of our beloved.

If you wish to make a donation in Bobby’s name, please send to a charity of your choice.