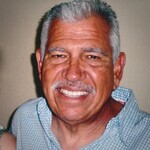 Ralph Salcido, 70, of Lake Elizabeth, passed away February
16, 2021 of complications due to COVID-19. Though his
passing was unexpected he was able to receive the
Sacrament of the Anointing of the Sick before his departure
from this Earth which was very important to him and his family.

He was born in Darwin, California on February 22, 1950 to
Pauline (1920-2019) and Matias Salcido (1911-1974).
He is survived by his wife Sara Salcido of 42 years; his
daughters Jessica Parada and husband Nick Parada of
Lancaster, CA; Cristal Salcido of Lake Elizabeth, CA; and
Rosaria Angry of Colorado. He is also survived by
grandchildren Leslie Parada, Anthony Parada,
Tommy Parada, Josie Parada, Naomi and Sonya Angry,
and brother Richard Salcido and sister in law Maryann
of Philadelphia, PA. As the patriarch of the family,
he instilled unto them the core values of faith, work ethic,
honesty and love.

In 1969, Ralph enlisted in the United States Army. He served
two tours in Vietnam. After his honorable discharge he went
on to trade school and learned the craft of auto and
furniture upholstery. He owned his own upholstery shop
for many years before securing employment with the
Department of Water and Power. He worked his way up
in the company, retiring after 28 years as a heavy
equipment operator. In his spare time, he loved training
in the karate style of Okinawa-te in which he was a
second degree black belt. He also loved riding his Harley,
which he rode across the US to forty-eight states.
In his retirement years he took on the hobby of buying
older homes and remodeling them. He was most happy
surrounded by his family and loyal companion,
his dog, Delcy. He was a loving husband, father,
father in law, grandfather and brother who will be
greatly missed by all.

Ralph’s favorite saying was “Put God first, family second
and everything else will fall into place”, and this is exactly
how he chose to live his life.