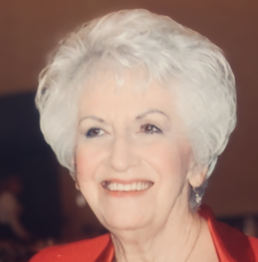 Rehm, “Polly'' Pauline Ann (Thompson), 92, gained her “angel wings” on February 23, 2022. Born on February 4, 1930 in Logansport, Indiana, she was the only child of Paul and Isabel Thompson. Wed in 1948, she remained married to her first love, Harold Rehm, for 65 years before his passing in late 2013. Polly was the devoted and loving mother of five children. She was predeceased by her son Michael Rehm (2010), daughter Janet Arruda (2019), daughter-in-law Debbie Rehm (2001) and son-in-law Ray Howard (2004). Surviving are her sons, Daniel Rehm (Kam) of San Diego, Barry Rehm of Temecula and Diane Jones (Roger) of Quartz Hill. In addition to her children, Polly was the doting, adoring grandmother of 13 and great-grandmother of 24.

Kind and selfless, she lovingly performed every task she undertook with grace and poise, be it raising her children, helping with grandkids, gardening, writing poetry or playing the piano by ear. An active member of the Catholic Church, she volunteered at Sacred Heart School, as well being a regular greeter at Saint Serra Parish. She was also an active member of the Quartz Hill Women’s Club, Secretary of the AV Chapter of the City of Hope for 20-years and a board member of the AV Roadrunners RV Club. Polly was known for her generous nature, her quick wit and corny puns and her beautiful smile.

Viewing and rosary are scheduled for Friday, April 8th from 2PM-6PM at Halley-Olsen Mortuary. Funeral Mass will be at Saint Serra Catholic Church Saturday, April 9th at 10AM immediately followed by interment services at Good Shepherd Catholic Cemetery.

In lieu of flowers, Polly requested that donations be made to The City of Hope.