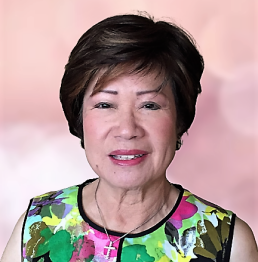 “Pat” or “Baby”, as she has affectionately been called, was born on April 30, 1944 to Jorge and Maria Castelo in the town of San Isidro province of Nueva Ecija, Philippines. She was the youngest and only sister to her older brother Feliciano and her twin brother Pastor.

Growing up she helped work the rice fields but had always dreamt of a life in the city. She got her chance when someone encouraged her to study and become a hair and makeup artist and brought with her Jun Encarnacion, her cousin. They set out into the big city, Manila, and eventually opened up their own salons in Sampaloc, Manila.

While she ventured into getting experience as a hair and make up artist, she got married, had a son, Gerardo, and finished High School in Manila. She contracted breast cancer and had a mastectomy. She was a survivor of cancer for 36 years.

She had a rocky marriage and turned to God for help. She got into the Cursillo and became actively involved since the 1980’s.

As a mother, she helped ensure that her children got an education she never had -- Gerry finished medical school and and adopted daughter, Maria Theresa, finished Pharmacy, both at UST.

She found an opportunity to come to the United States where she cared for the elderly, cooked for them and fed them while pursuing her hair and make up profession on the side for friends and family. In the process, She met her late husband Fred McCaw Jr in California. Together they were actively involved with the community through the Filipino American Association in the Antelope Valley, and in Memphis, TN, often leading and coordinating medical missions to the Philippines; got involved with the Cursillo group both in Memphis, TN and in Palmdale, CA; and she also supported her husband with the Freemasons and became part of the Eastern Star. She spent 18 wonderful years in blissful romance until his passing in 2009.

She loved to cook, hosted many karaoke parties, and was very generous at heart. Hailing from a small provincial town, she had managed to travel to many places with her husband and helped her mother and other relatives in the province as much as she could. She will be deeply missed and remembered.

Divina Pastora Castelo McCaw, age 78, passed away on November 4, 2022 in Palmdale, California surrounded by her family and friends. She is survived by her son Gerardo Talusan and his wife Ruth, and grand children: Justin, Joseph and Jessica Talusan; Noel Arellano, husband of Maria Theresa (deceased) and 3 grandkids, stepchildren Michael McCaw and spouse Shirley, Rozzel Gutierrez and her spouse Felix, Rachel Lunt and her spouse Perry, Madelaine Gallego and her spouse Vince, Josephine Reed and spouse Tony; and 28 grandchildren and great grand children.