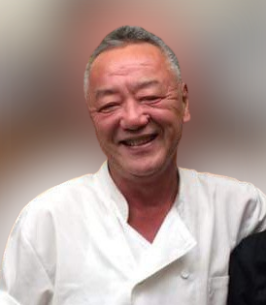 Masaharu Nakamura was born on March 15, 1954, in Izumo, Japan to Isao Bob Nakamura and Kikuko Yonehara. He spent his early childhood years in Japan and in the year of 1967, at the age of 13, he moved to Los Angeles, CA with his family.

He attended Los Angeles High School and after graduating high school Masaharu moved back to Izumo, Japan in 1972. Here he stayed with his uncle to perform missionary work for 10 years. He lived at the church and served the community by preparing meals and spreading the teachings of Tenrikyo to nearby neighborhoods. His interest in cooking arose from his interactions with his uncle who taught him everything about cooking. Shortly thereafter, with the guidance of his uncle, he decided to return to the United States in 1982 to be with his family.

His love for cooking prompted him to look for a culinary job and started working at Noma Restaurant in Santa Monica. He worked there for 4 years and lived in the apartment his father owned. In 1985 his father purchased a home in the Antelope Valley and he followed suit. In the hope of continuing his passion for cooking he discovered Yoko’s Kitchen in Palmdale.

He purchased Yoko’s Kitchen on November 19, 1986, and Shogun Restaurant opened for business. At the time he had a limited Japanese selection and provided fish and chips and fried chicken. Gradually, over the years, he integrated more traditional Japanese cuisine in the hopes of creating an authentic Japanese restaurant. Shortly thereafter he met his wife Mieko in 1987 and married in 1988. Over the past 36 years he took pride in sharing his cooking and Japanese heritage with his customers. He formed many memorable memories with his customers and cherished those memories closely.

Masa passed away on October 31, 2022 at the age of 68 in his home in Quartz Hill. He is survived by his mother Kikuko Nakamura; wife Mieko Nakamura; daughters Kristina and Sachi; brother Kiyoshi Nakamura; Sister Carol Kaisho; nieces and nephews.

A public viewing will be available at 2:30 pm on Saturday, November 19, 2022, at Halley Olsen Murphy Funerals & Cremations in Lancaster.