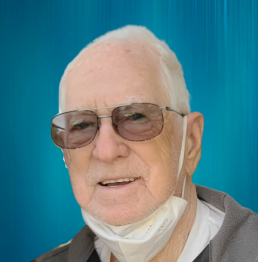 Was born in Fulton, Kentucky on October 17th 1932. Graduating from Fulton High and enlisted in the US Air Force June 30th, 1951. He served 4 years active military and 4 years reserve, being deployed to Korea with the 3rd Bomb Wing as a bomb sight specialist at Kunsan, and an exercise in Guam with the SAC (Strategic Air Command) B-36 Wing from Travis AFB, CA. He received his honorable discharge DD-214 on June 29th, 1959.

After his active duty Les attended Modesto Junior College and Cal State University of Fresno where he obtained a Bachelors of Science Degree in Electronics Engineering. After graduating in 1962 he accepted a civilian position with the US Air Force at Edwards AFB where he was assigned to the Flight Test Instrumentation Branch (FTFSID).

His first assignment was to assist in designing a physiological instrumentation measurement system for crew members of the DYNASOR program, and assisting in evaluating a airborne mass spectrometer for monitoring pressures of gases in astronaut pressure suits. Les held responsible positions for several small, but interesting programs such as a “kicker” switch for the NF-104 to prevent loss of control during “Zoom” flights, redesign of corner reflectors for the RADFAG range, airborne television, thrust stand instrumentation integration, and aerial bullet scoring system, to name a few.

Les was the instrumentation project engineer (JPE) for the planning phase of the F-111 and the F-15 Air Force test programs. He provided extensive expertise during the flight test instrumentation calibration and test flights for performance, stability and control for the US Air Force acceptance at General Dynamics of Fort Worth Texas. He was also the IPE until 1969 when he enrolled in graduate studies at Arizona State University, Tempe AZ. where he returned to EAFB and assigned as an IPE to new projects branch. He was assigned to the F-15 DT&E program for the planning phase and the Instrumentation Engineer on the “All Weather” program until a reassignment to the Technical Development Branch (TEESD) in 1973.

Around 1983 Les accepted a position out at Plant 42 working as a program engineer and project manager for the Lancer B1-B improving aircraft avionics and systems stability. Due to Les’s ability to think outside the box concluding with a history of significant project success, by 1986 he was recommended and accepted a position at LA AFB working with the new GPS satellite implementation. A technical feat was upon him, space time was not the same as earth time. His task was to design an electronic compensation method to keep GPS satellites time synced to earth time.

Les retired from civilian service in June 1988, but he wasn’t done giving to his community yet. He remained active in the community as a substitute teacher for the local Lancaster grammar schools until 2017.

Les received recognition for holding executive positions in two professional organizations, of the Instrument Society of America (ISA), and the Institute of Electrical and Electronics Engineering (IEEE). It should also be mentioned that Les was received “Outstanding Performance” rating in 1965 and 1969, with a letter of appreciation for his part in the development and testing of the aerial bullet scoring system.

Les has taken advantage of the civilian personnel training program by enrolling in continuing education courses in digital electronics engineering at USC and CSUN.

Upon retirement it was written by one of his superiors that Les can be proud of his more than 40 years of service to his country, his dedication, integrity, and professional performance are a great credit to him and exemplifies immeasurable service to the US Air Force.

After retirement Les wanted to give back to the community and be a positive influence on the next generation of leaders and doer’s by becoming a substitute teacher for the local grammar schools. During his substitute years Les was honored by the school and children as a military veteran. He was active in his community with local organizations from the time the family moved to the Antelope Valley, joining the local Elks Lodge BPOE 1625 in 1962, he was also an active member of the Masonic family for more than 50 years, the Masonic Shrine, the marching ASKARS, the local Moose Lodge, and the VFW. Every year Les would buy a block of Shrine Circus tickets and sponsor children wanting to see the circus. Even with all that activity, Les found Christ as his savior at an early age, and you would find him from time to time attending the 1st Baptist Church, and later Olivet Baptist.

Many members of the community knew Les as the “Egg Man”. While growing up Les enjoyed his parents chickens and fresh eggs, and thought this was one of the things he could enjoy doing again after retirement if he could move from the north side of Lancaster to a more rural area. Les relocated his family to the Quartz Hill unincorporated area and successfully setup a brood of hens producing many more eggs than the family could consume. Thus he began to offer his free range organic eggs to friends he’d met along life’s path. For the chickens that couldn’t behave themselves chicken dinner wasn’t unheard of by sunset. This was one thing that really kept Les going day after day, he enjoyed seeing the smile and appreciation for fresh eggs from those he delivered eggs to.

In conclusion, sometimes spreading himself thin, Les was always attempting to find meaningful ways to give something back to his community, being a helping hand whenever and wherever somebody needed it. Les will be missed by all who’s lives he touched.

Lester Merryman is survived by his loving wife by his side for 67 years, and his five children, Debra, Lester Jr., Marylyn, Darryl, Virginia, and their families with six grandchildren and 9 great grandchildren, and 1 great great grandson. Interment will be at Bakersfield National Cemetery, 30338 East Bear Mountain Blvd., Arvin, CA 93203.


In lieu of flowers, please make a donation in his name to either: