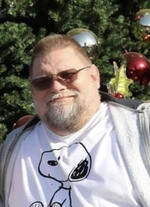 Kenneth Joseph Stuart passed away January 27, 2021of COVID-19. He was born June 18, 1966
in Brooklyn New York to Kenneth Richard and Olga Theresa.
Ken joined the air force in 1987 and became an avionics maintenance technician. After
moving around with the air force, he finally settled down at Edwards AFB in 1999 where he met
the love of his life, Marla Randall. They married March 10, 2001 and went on to have two
children, Matthew in 2003 and Maddison in 2006.
During his time in the air force, he worked on the B-2. He retired after 21 years and went to
work as a civilian at Edwards AFB.
He is preceded in death by his parents and is survived by wife Marla, son Matthew, daughter
Maddison, sisters Barbara O’Hare and Theresa Mauro, brothers Thomas Miller and Edward
Miller, 8 nieces and nephews, 4 great nieces and nephews.

Please copy and paste the link to browser to view livestream of services.