To share your memory on the wall of John Manke, sign in using one of the following options:

John, age 87, passed away January 31, 2019. He was born November 13, 1931 in Selby, South Dakota.
John attended the University of South Dakota, joined the U.S. Navy in 1951, was selected for the NROTC program, and graduated from Marquette University in 1956 with a Bachelor of Science Degree in Electrical Engineering and a commission in the United States Marine Corps.
John entered flight training and served as a fighter pilot with the Marines. He left the service in 1960 and was a Major in the USMC Retired Reserve. John joined NASA on May 25, 1962 as a flight research engineer. He was later assigned to the Pilots’ Office and flew various support aircraft, including the F-104, F-5D, F-111, and C-46.
John served as Director of Flight Operations, and Site Manager of NASA's Flight Research Center at Edwards AFB, CA, during a 22-year career with NASA.
John flew over 4,500 hours in 56 different aircraft. His career was highlighted by NASA research flights to test lifting body aircraft, preparing the way for the Space Shuttle and follow-on programs.
He piloted the first unpowered lifting body approach to a precision landing on a concrete runway in 1975, providing data needed by the Space Shuttle program to prepare for unpowered landings from orbital flight. As a principal NASA lifting body pilot, his first flights included the first sustained rocket-powered flight of a lifting body vehicle, the first supersonic flight of this type of vehicle, and the first flight of the delta shaped X-24B. He flew all four rocket-powered lifting bodies: The HL-10, X-24A, X-24B, and the M2-F3.
As Director of Flight Operations at NASA Dryden, John had operational responsibility for the flight test program of the mated Shuttle/Boeing 747. He flew exploratory flight tests in the F-8 Digital Fly-By-Wire aircraft to develop control system design changes for the Shuttle Orbiter. He participated in the high-technology programs including the X-15, Lifting Bodies, Space Shuttle, AFTI/F-16, AFTI/F-111, B-2 Stealth Bomber, and X-29. He earned his Mach 3+ pin flying the YF-12 Blackbird.
John has been honored with the NASA Medal for Outstanding Leadership, the NASA Medal for Exceptional Service, was nominated by NASA in 1984 for the Presidential Rank of Meritorious Executive, and was named to the Aerospace Walk of Honor in 1997.
John also served as a Eucharistic Minister at Sacred Heart Parish, loved flying model airplanes, and spending time with his family.
He leaves his wife of 65 years, Marilyn, sons: John (Tina), and Tom (Beth), daughters: Terri (Frank), Donna (Richard), and Carol (Chris - RIP), 13 grandchildren and 21 great- grandchildren.
Services will be held at 10:00 am Friday, February 8, 2019, at St. Junipero Serra Parish in Lancaster. Graveside service will follow at Good Shepherd Cemetery.
Read Less

To send flowers to the family or plant a tree in memory of John Arnold Manke Sr., please visit our Heartfelt Sympathies Store.

Receive notifications about information and event scheduling for John

We encourage you to share your most beloved memories of John here, so that the family and other loved ones can always see it. You can upload cherished photographs, or share your favorite stories, and can even comment on those shared by others. 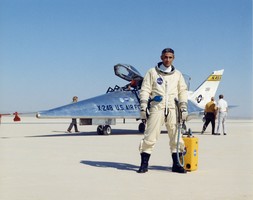