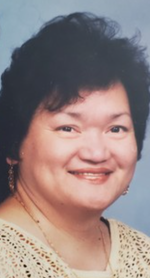 On Sunday, October 25, 2020, Herminia Cortez Valerio, wife, mother, grandmother, sister, aunt, and dear friend to many, lost her battle with liver cancer at the age of 74. She succumbed to her illness peacefully in her sleep in the family home.

Herminia emigrated from the Philippines to the United States in 1979 and worked her way through a 25-year career at Pacific Bell (now AT&T). The family planted roots in Lancaster, California where she eventually started a business venture in Remy’s Oriental Market, a local Filipino store. Cooking was her passion and she became well-known for it within the local Filipino community, whose many special events were catered by her.

Herminia will forever be in the hearts of her husband Luisito Valerio, daughter Maryann Germita, son-in-law Paulee, and grandchildren Jeremy, Julian, Joshua and Jade, her sisters Angelina Rosario and Marilou Garcia, brother Fernando Cortez, many nephews and nieces, and countless friends. She was preceded in death by her parents, Jeremias Sr. and Felina, sister Myrna Bacolod and brother Jeremias Jr..

“Rest in Peace”, how much this says,
Be free of pain no more to weep
Find joy that never ends, possess new life that here you could not keep.
“Rest in Peace”, and though we grieve,
Reaching for your hand in vain,
Our faith is such that we believe
That all of us shall meet again