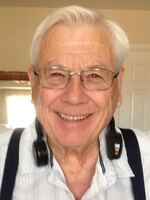 On Monday, February 8, 2021 Harvey Gene Hutchins of Rosamond, California, was called home to be with the Lord after struggling with Covid Pneumonia. Harvey was born on August 16, 1935 in Leonard, Texas, the only child of the late Harvey Lester and Ina Mae Hutchins. Harvey leaves to cherish his memory his devoted wife of 43 years, Linda D. Hutchins, his son Harvey “Chip” Hutchins of Oklahoma (previous marriage), his daughter Sarah D. Colley and her husband Earnest B. Colley, and two grandsons, Micah and Caiden Talley of North Carolina.

Harvey met his wife Linda while working at Goodyear Tire, one of the many jobs he held in his life. While some would say “Jack of all trades and master of none,” Harvey was more like the master of all trades. Just some of his career samples include managing a Thrifty’s drugstore, selling and detailing used cars, watch repair, ice cream man, landlord, and major appliance salesman at Sears and Circuit City. Harvey was incredibly intelligent and had a love of learning that could not be quenched. He knew something about everything it seemed, which made him able to conversate with almost anyone, comfortable in almost any situation, but unbearable to compete with in trivia games! Learning about new things was his passion, anything from how to invest in stocks to how to speak Spanish, he would approach it logically, figure out how it works and look for patterns.

After Harvey and Linda were married in 1977, they had a daughter, Sarah. Harvey was always concerned with providing the best life he could for his family and would go to any length to do so. During a difficult economic time he took a temporary job working on catwalks at the top of silos, even with heights being one of his worst fears. He was persistent, always expecting the best out of himself and inspiring others to do so as well.

Generosity, respect, and an unmatched sense of humor are only a small part of the man that left his mark on so many people throughout his lifetime. He blessed others and made them better simply by being who he was.

A celebration service of Harvey’s life will be held at 1:00 PM at Faith Community Church in Palmdale, California with a small, socially distanced reception held directly after the service.