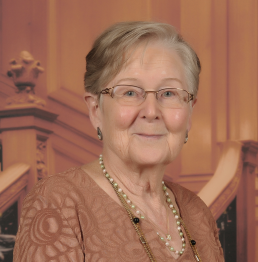 Grace Elinor McClary Walker Wiesmann died January 3, 2022, after more than 97 years on this earth. Twice widowed, she is survived by four of her five children, two step-children, 9 grandchildren and 7 great-grandchildren, as well as her brother John McClary. She loves each and every one of them.

Grace was born in Kent, Ohio on July 29, 1924, to Dan and Clarice McClary, their first child. She attended school in the area through college, where she graduated from Kent State University, becoming an elementary school teacher in Cleveland in about 1946. At a church event for singles, she met Joseph A. Walker, recently discharged from the Army Air Force, who was employed by the National Advisory Committee for Aeronautics as a test pilot. They married in July of 1948. In 1950, their first child, Thomas, was born. In 1951, Joe was transferred by N.A.C.A. to Edwards Air Force Base in California, where a flight test center was located. They drove cross-country and relocated first to the Marine base near Mojave, where Grace learned why the prior tenants had sealed their windows. After a time, they moved to Lancaster and rented a home. There both Grace and Joe became members of the First United Methodist Church, which at that time was located on Lancaster Boulevard. They both participated in church affairs, Joe ultimately becoming a member of the Board of Directors, while Grace taught Sunday School. In 1952, Grace and Joe welcomed their second child, James. In 1955, the family moved to an area outside Lancaster known as White Fence Farms, to a home built by Joe with help from friends and contractors. Their third child, Robert, was born in 1956. Tragically, Robbie was taken by a sudden illness in June of 1958, the first great loss suffered by Grace. She never forgot him, and used her experience to comfort others who experienced similar losses. In 1959, the family welcomed a fourth child, Joseph Brian. In 1961, Grace finally was granted her great wish, to bear a girl child, Elizabeth. She was truly grateful for that gift. By that time, Joe’s career in flight test had led to him regularly setting world records for winged flight for both altitude and speed, in the X-15 research aircraft. As the program progressed, these records were regularly exceeded. As a result of his participation in the program, Joe became, for some years, world famous, and Grace enjoyed meeting many important persons and attending numerous events featuring her husband, in particular his appearance on the This is Your Life television program. N.A.C.A. had become the National Aeronautics and Space Administration in October, 1958. Grace suffered another great loss when Joe was killed in a dramatic and tragic mid-air collision in June of 1966. For the rest of her life, she stood as the protector of his legacy and reputation. One high point was being interviewed, during the late 1970s, by the famous writer Tom Wolfe for his book, The Right Stuff. Grace reported that he loved her Gazpacho. In 1974 Grace wed for a second time, to Raymond Carl Wiesmann, a divorced father of two children, Pamela and Kim, after they met at a Parents Without Partners event. The new family moved to Reedley, California, when Ray was transferred to that town by General Telephone. They purchased a small farm, planting persimmon trees to make the land productive. Ray did the farming, and Grace ran the household. Ray was another WW II veteran, a member of the Pearl Harbor Survivors Association, and Grace also honored his service and legacy. Due to advancing age, in 1993 Grace and Ray, their children all grown, moved to a home more ‘in town’, near Reedley Community College, where they lived together until Ray’s death in 2007. Their home became a center for family gatherings, at holidays and otherwise, being relatively central to the scattered locations of their children and grandchildren. After Ray’s death, Grace continued as a devoted member of the First United Methodist Church of Reedley, where she handled the office of Treasurer. She made many dear friends through the church and through Ray’s work, a few of whom survive her. She also continued to host many family and holiday gatherings at her home.

Grace was a true homemaker and caregiver. She provided care to her father and mother, who moved to California in the 1970's, and also for Ray during the final years of his life, when he was troubled by illness and dementia. Grace, who defied age for so many years, finally consented to move to assisted living in Reedley in 2021. She remained there until her final illness. Despite the turmoil of an emergency room overwhelmed by victims of the pandemic, she passed in relative peace and comfort, quite quickly when the moment arrived, for which her family is most grateful.

A memorial service will be held at the Halley-Olsen-Murphy funeral home in Lancaster, California on January 31, 2022 at 11 a.m. with attendance subject to COVID restrictions. The service should be available on line. This will be followed by a burial service to be attended by family only. In lieu of flowers, gifts may be made in Grace’s memory to the First United Methodist Church of Reedley or the Rafiki Foundation. Both causes were dear to Grace’s heart.