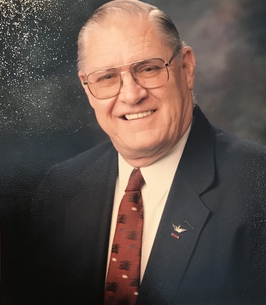 Share this tribute
Memorial Candles Lit for George | SEE ALL
Light a Candle
"We are honored to provide this Book of Memories to the family."
— Halley Olsen Murphy Funerals and Cremations
Funeral Details Memory Wall Photos & Videos Plant a Tree

Print
George “Bud” Reams, a thirty year resident of Lancaster, California passed away peacefully on September 14, 2018. George was born on July 3, 1934, in San Francisco, California. He was raised in Marin County and graduated from Sir Francis Drake High School. He earned a Bachelor’s degree from San Jose State University in Recreation Sciences and later earned a Master’s Degree from Fresno State University in Education. During the 1950’s he met and fell in love with his livelong sweetheart, Kristin Thomsen of Coalinga, California. The two wed in 1959 after working as camp counselors at Camp Pinecrest in Cambria, California where they made many lifelong friends. Shortly afterward George was drafted into the United States Army where he trained as a pilot and began a lifelong love of aviation. He eventually attained the rank of Colonel with the Army Reserves. George and Kris began their married lives as teachers at Bural Elementary school in Fresno, County. George later became a Vice Principal at Huron Elementary School where they bought their first home. In the early seventies he took a position as Principal of Biola-Pershing Elementary School District, then Principal of El Capitan Jr. High School and eventually Superintendent of McKinley-Roosevelt Elementary District, all schools of the future Central Unified District of Fresno County. In 1984 George became Superintendent of the Westside School District in the Antelope Valley. During his time in this position he oversaw the construction of many new school sites as the area developed rapidly. In 1992 he earned his Doctorate Degree in Education from Pepperdine University. After retiring from his career as an educator in 1995 he began a new career working for Monte Vista Building sites as a Commercial Property Manager. George believed in being an active member of the community and giving back whenever possible. He was a lifelong supporter of the Boy Scouts of America, member of Lions Club, Red Cross, United Way and the area Board of Trade. He volunteered as Treasurer for the Edwards Flight Museum and the Civilian Military Support Organization. He was an active member of the Lancaster Baptist church. His many accolades and achievements are to be noted. George is survived by his son Brian Reams and his wife Sally, his daughter Kimberly Van Wuffen and her husband Clinton, and grandchildren, Noah Reams and Laura Copus and her husband Sean as well as great-granddaughter Quinn Copus. He was preceded in death by his wife Kristin in October of 2017 after 58 years of marriage.

To plant a tree in memory of George Ashby Reams, please visit our Heartfelt Sympathies Store.

We encourage you to share any memorable photos or stories about George. All tributes placed on and purchased through this memorial website will remain on in perpetuity for future generations.