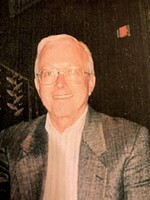 Edward Neville Bradfield, Jr passed away on January 13, 2021 in Lancaster, CA.
He was born October 4, 1935 in Leesburg, Virginia.
He was an Aeronautical Engineer, Flight Test Engineer and Program Manager with Northrop Grumman Corp and US Civil Service with 36 years experience. He developed and published method for determining Air Minimum Directional Control Speed of aircraft that did not require flying at low altitudes. Memorandum on this subject is in use today at the US Air Force Test Pilot School.
He joined the Air Force in 1958 and began flying with the Scott AFB Aero Club. He resigned from the Air Force in 1965.
He was preceded in death by his parents, Ruth Crim and Edward N. Bradfield, Sr and his sister Ellen Bradfield DeCourcy. He is survived by his sister Jane Bradfield Davison, nieces Susan DeCourcy LeMarr (Ronald), Anne DeCourcy George (Fred), nephews John S. DeCourcy, Jr (Rosemary), John W. Davison (Amy), and Brad Davison.
He will be laid to rest with his parents in Union Cemetery in Leesburg, VA.