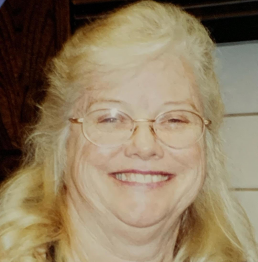 Earleen Jacqueline Messer of Lancaster, CA, passed away January 15, 2022 in Clifton, TX at the age of 77.
She was born on October 30, 1944 in Newhall, CA to Earl James and Phay “Lorraine” Moore.
She was a graduate of Palmdale High School and attended Antelope Valley College, where she honed
her bookkeeping skills.

She married William “Wayne” Messer in September 1964 and started her family. She raised four
children and volunteered at Antelope Valley Hospital as a Candy Striper. In 1977, she and Wayne
became owners of Monte Vista Car Wash until 1990. They bought Country Boy Submarine Sandwich and
ran it for about three years. At that time they retired. She and Wayne were supporters of the many
functions and charities of the Lancaster Elks Lodge. One of her favorite functions was playing BINGO
every Sunday and going on outings with the Camper Club. She was a member of Our Savior’s Lutheran
Church in Lancaster, CA for 44 years, then became a member of Grace Chapel in Lancaster, CA in 2008.
She spent time with her grandchildren, was an avid reader, loved to sew and quilt, and took as many
trips to Las Vegas as she could.

A memorial visitation will be held for friends and family from 5-7pm, Thursday, March 17, 2022 at
Halley-Olsen Mortuary. A private interment gravesite ceremony will be held at the Lancaster Cemetery
in Lancaster, CA on Friday, March 18, 2022 for the immediate family.

The family would like to give a big “Thank You” to Sunset Homes in Clifton, TX for the kind and
considerate care given to our mom, aka “Tumbleweed” during her last year and final days with us. And,
to Country Club Retirement Community (CCRC) in Whitney, TX for the care and support given to her
during her time at their facility where she inherited the nickname Tumbleweed. We couldn’t have
provided the care to her that she needed without the support and care from these facilities.