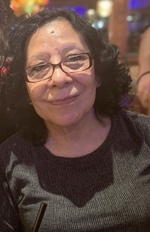 Diana was born in September 1945 in Safford, Arizona where she grew up with her siblings Angie, Toni, Ray, David and Frances before moving to Southern California.

Diana spent many years working in the medical and social services field. She began working at Valley Community Clinic where she worked for 15 years. She started as a medical receptionist and worked her way up to a clinical supervisor. Later, Diana also spent several years working as a case manager for El Nido Family Services and a counselor for Life Steps Foundation.

Diana was a loving and giving woman. She regularly donated to charities such as St. Jude’s Children’s Hospital, Wounded Warrior Project, various wildlife organizations and USO to name a few. Diana loved to read, especially (auto)biographies. She also enjoyed painting, candle making, drawing and writing. One of her poems was recognized by The International Library of Poetry in 1999. Diana was also a fierce advocate for her community and was recognized in 1974 for contributing ideas to improve public transportation. Diana loved her community and always expressed her desire and wish to open up shelters to help the homeless and veterans returning home.
Diana is survived by her children Frank, David, Regina, Jason and Tianna and their respective families. Diana is also survived by her siblings and their respective families, Angie, Toni, Ray and David. She is preceded in death by her partner Victor Davis and sister Frances Rodriguez. Diana has 14 grandchildren and 3 great grandchildren whom she loved deeply. Diana’s grandchildren were her world and she was immensely proud of each and everyone of them.
Without her, her children and grandchildren wouldn’t be who they are today. Diana was taken too soon from her family on October 30, 2020. While Diana will forever be loved and missed by her family, they know they’ve gained an angel to watch over them.
In lieu of flowers, we are asking for donations to be made in her name to St. Jude’s Children’s Hospital.