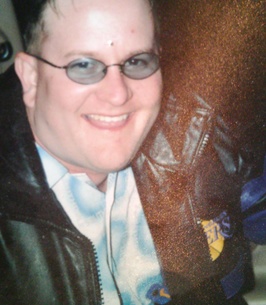 Share this tribute
Memorial Candles Lit for Chad | SEE ALL
Light a Candle
"We are honored to provide this Book of Memories to the family."
— Halley Olsen Murphy Funerals and Cremations
Funeral Details Memory Wall Photos & Videos Plant a Tree

Print
Holbrook, Chad Michael was born August 20, 1973 at Fox Hills Hospital located by Santa Monica, CA and passed away peacefully at home on October 18, 2018. He was 45 years old.
He attended Grace Lutheran School and Church. He graduated and was confirmed in May of 1987. He loved to play all sports, but baseball, swimming, and diving were his favorites. Chad attended Rosamond High School, graduating in 1991. He went to AV College while also working. He went to Auctioneering School in Iowa, graduating top of his class. He worked at Edwards Air Force base for years. Chad enjoyed the holidays and was very giving of his time, love, and himself. He met and married Deanna Twigg on December 27, 2003. They were married in Las Vegas with family present.
In 2011, the family moved to Sandpoint, ID. Chad felt like he had found his home. On August 1, 2012, Chad was told he had a spot on his brain. He had surgery in Washington State in hopes of getting the tumor removed. The family moved back to Rosamond for family support. He endured weeks and months of radiation and chemo. The disease change his life so much, as it will.
Chad leaves behind his wife, Deanna, sons, Cody and James (James' daughter, Jamie), mother, Michelle, father, Rod (wife Irene), mother in law, Elaine, father in law, Stan (wife Patty), and many extended family and friends. The loss of our loved one makes moving on seem insurmountable, but he is at peace.

To plant a tree in memory of Chad Michael Holbrook, please visit our Heartfelt Sympathies Store.

We encourage you to share any memorable photos or stories about Chad . All tributes placed on and purchased through this memorial website will remain on in perpetuity for future generations.

Chad you will always be missed and always in our hearts
Love, Dad and Irene - Tuesday October 30, 2018 via Heartfelt Sympathies
Share This:

CN
Since he was only 7 years old, I remember Chad as a loving, caring, fun little boy, with that special twinkle in his eyes and fun wit. Into adulthood he retained that wonderful, bright personality. His shining, loving spirit has left us too soon, but he is forever a part of all those whose hearts he touched. He will always have a special place in my heart. My deepest condolences.
Cathy Nordlund - Friday October 26, 2018 via Condolence Message
Share This:
1
Page 1 of 1
Share
×