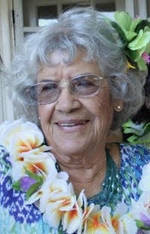 CARMEN NAVARRETTE ISENBERG
March 8, 1921- November 15, 2020
Carmen, 99, loving wife, mother, mother-in-law, great grandmother great-great grandmother, aunt and
friend, passed away peacefully, surrounded by her family Hank, Mary, Becky, David and Georgia, at
Caring Hearts Senior Care Home in Lancaster. She is survived by her husband Hank, daughters Olivia
(Don) Silva, Mary (Mike) McConnell, Becky (Win) Reynolds, Debi (Dale) Fry, Cindy Vasquez and son
David (Georgia) Acuna, 16 grand children, 26 great-grand children and 6 great-great grand children. She
was predeceased by her son Anthony Acuna (Shirley).
Carmen was born in Duncan, Arizona, the youngest of three children and lost her mother while very
young. She was raised by her sister Josephine and eventually settled in Los Angeles, California. She
met her first husband Elias Acuna through friends in 1942, married and remained married until 1979.
Together they raised seven children in Gardena, California. She and Elias bought their first home in 1967
located in Gardena, CA. When her last child was a teen, she began to work full-time outside of the home.
She was a loving mother and homemaker.
As a young mother, Carmen took pride in her home, although, the family moved quite often due to a
growing family and the need for a larger home. She had a sly sense of humor, which she kept until the
very end. Carmen had many talents. She was a talented artist but gave it up to raise her family. Carmen
loved to garden and anyone who visited her home would take note of the lush landscape and varieties of

flowers. She was a great cook and would preserve her garden fruit and vegetables and was also a skilled
seamstress. She made her children school clothes and Easter outfits when they were young.
She worked for Hughes Aircraft and met her second husband Tom Navarrette through friends. They
married in 1980 and eventually built their retirement home in Leona Valley on five acres adjacent to her
daughter Olivia and her husband Don. The couple moved to Quartz Hill in 1989 where Tom passed away
in 1991. Carmen retired from Hughes Aircraft in 1984.
She met Hank Isenberg in 1996 and they remained companions for many years until Hank popped the
question in 2013. They married when Carmen was 93 years old in Laughlin, Nevada. She and Hank
would love to go camping and traveled to Stateline and Bishop for quick getaways. When she moved to
the High Desert, Carmen was a member of the VFW #3000, Women’s Auxiliary in Quartz Hill. She and
Hank made many friends at the VFW and continued with volunteering their services. Carmen loved life
and we all celebrated many events with her. There was always music and dancing, eating and drinking,
laughing and telling stories within her very large family. She also loved to read and was always working
on word puzzles
She was very close to her nephews and nieces from her first marriage to Elias Acuna and remained so
until her death. She often reminisced about them and their mothers who were not only sister-in-laws but
best friends. She loved her children and grandchildren as she did her garden; sow the seeds, nurture and
watch them grow. She was loved dearly and we will miss her. Forever in our hearts dearest mom.
Funeral Services will be held Monday, November 30, 2020 at 10:00am for immediate family viewing,
11:00 am service at Saint Junipero Serra Catholic Church, Quartz Hill, CA with burial to follow at Good
Shepherd Catholic Cemetery, Lancaster, CA