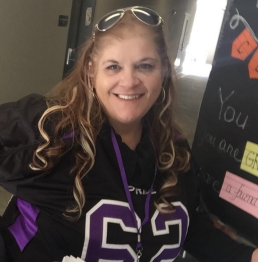 Benita Lynn Williams was born on February 19th, 1961 to Benjamin and June Kimberlin at Holloman AFB in Alamogordo, New Mexico. She was third of four daughters, she was raised in an Air Force family and grew up in such places as Okinawa, Japan and Lakenheath, England, while living in The Dakotas, Missouri, Oklahoma, New Mexico, and Texas until finally Settling in California in 1980 where she would meet the love of her life and start her family in 1985.

Benita and Ken were blessed with five beautiful children. Robert Shaun, Kaitlin Elizabeth, Kenneth James, Joseph David, and Gracelyn Elizabeth. Being a mother was the light of her life. She often said being a mother and being able to watch her children grow into loving adults was Godś true gift to her. Her love and joy were expanded even more with the births of her five beautiful grandchildren.

Her other love was Teaching, she taught at Desert Winds High School and Eastside High school, she loved her students and always went the extra mile to make sure they felt loved, secure and supported , and always told them anything was possible, and was there to encourage and guide them, through the years she collected dozens of ¨Ducks¨ as she lovingly called them.

Benita had a love and light about her. One that she credited to her Love and faith of God and instilled into and spread into the lives of her family, friends, students, and colleagues. Her faith has given so many others reason to have faith which brought her so much joy. She will forever be loved and missed by so many. She left us much, much too soon on November 22, 2022 at 6:53 PM.