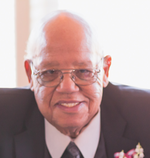 
Albert was born and raised in New Orleans, Louisiana. He was a committed husband and loved his, "Teedy Baby," who he married June 27th 1959. Albert moved his family to Los Angeles, California soon after for a greater life.


Albert spent seven years in the United States Army where he played in the band and was Honorably Discharged. Immediately following the Watts Riots Albert became an entrepreneur. He taught himself welding and painting which led to manufacturing Ornamental Iron Business for 25 years. He trained a slew of family members and young men. During his leisure time he was a professional drummer and artist. He later retired from the U.S. Postal Service and Palmdale Unified School District.


Albert will most of all be missed by so many children he raised. His children knew him as, "Daddy," while many other children knew him as "Pops". Albert was a role model to be honored. He fulfilled all his godly roles in his home: Head, Leader, Provider, Protector, Teacher and Nurturer.


He wasn't one to tell his children how to live, he simply modeled it. That has left behind a legacy for God to say,


"Well done my good and faithful servant. Thou hast been faithful over a few things, I will set thee over many. Come and share your master's happiness." (Matthew 25:23)


Albert was a very proud man. He taught his children to be proud of their accomplishments. He took pride in all of his work and all of his achievements; big or small. From his love of yard work to cooking or being in the service; to work at The U.S. Post Office and even an entrepreneur. Also a professional drummer and school crossing guard. Albert was always ecstatic to announce his dedication, time, and commitment he had put into any task that he had passion for. In his marriage of 62 years, Albert modeled, "There are no deal breakers."


Albert was a dedicated member of The Knights of Peter Claver and Knights of Columbus. Throughout the years Albert received all 6 sacraments.


Albert was an amazing man. He genuinely cared about the well being of his family and loved them dearly. As his days grew shorter, Albert humbled himself becoming a peacemaker. Although he will be greatly missed, we take refuge in knowing he is in a better place. His assignment on earth has been completed.


"I have fought the good fight, I have kept the faith. Now there is in store for me the crown of righteousness, which the Lord, the righteous judge, will award to me on that day - and not only to me, but also to all who have longed for His appearing." (2 Timothy 4:7-8)


Funeral Services will be held at St. Mary’s Catholic Church on Saturday, March 18, 2021 at 10:00am. A burial to follow at Good Shepherd Catholic Cemetery, Lancaster, CA. Due to COVID-19 Masks & Social distancing is to be practiced, please stay with your party. There will be NO Repass/Reception. The services will be live streamed in addition to recorded for online viewing for those unable to make it. Please use the link to view. You will need to copy and paste the link into a web browser to view.